I am seeing less of the sort of disarmingly charming and whimsical table top items that were produced in Paris during the Second Empire and into the Early Third Republic into the 1880's which were more frequently encountered in the markets at antiques shows and nice shops offering interesting and better quality decorative accessories from the 19th Century. I am referring and focusing my discussion today on small and amusing table top items which were produced by Parisian artisans and almost certainly sold to the sort of well to do Parisian upper middle class we encounter in Manet's paintings or while reading the novels of Balzac, Zola and Proust in shops that would often be found in places like the arcades of the Palais Royale.


These items were glistening delightful little objects which invariably combined mother-of-pearl with gilded metal wire work and gilded metal frames and that more often than not incorporated medallions of reverse coloured prints or hand painted panels on glass inset into the item in some way.  The example below is of a small footed tray for placing Cartes de visites - calling cards.  The larger central oval panel depicting the Madeleine is surrounded by a band of circular medallions with reverse painted images of other important buildings in Paris. The reader will undoubtedly recognize a view of The Pantheon by Sufflot and other notable buildings. Parisian scenes were a particularly common subject. It's very plausible many of these items were also produced for the tourist and export market. 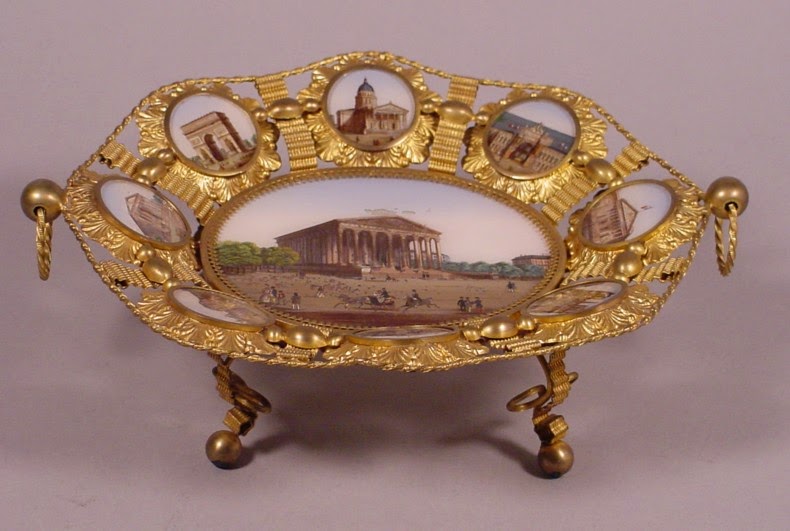 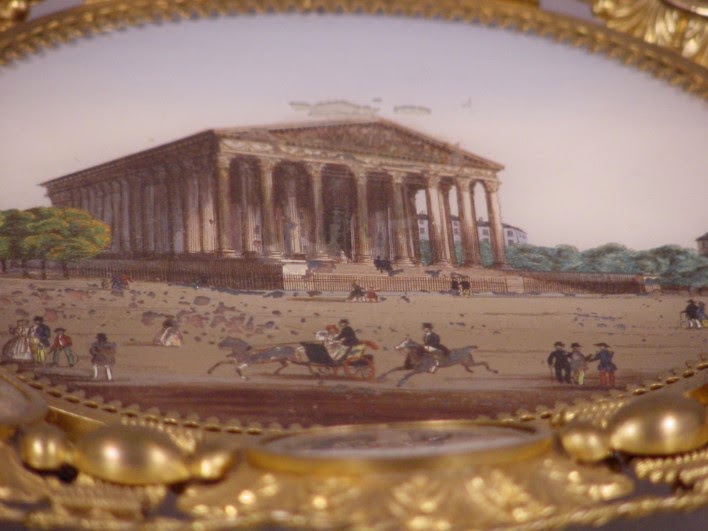 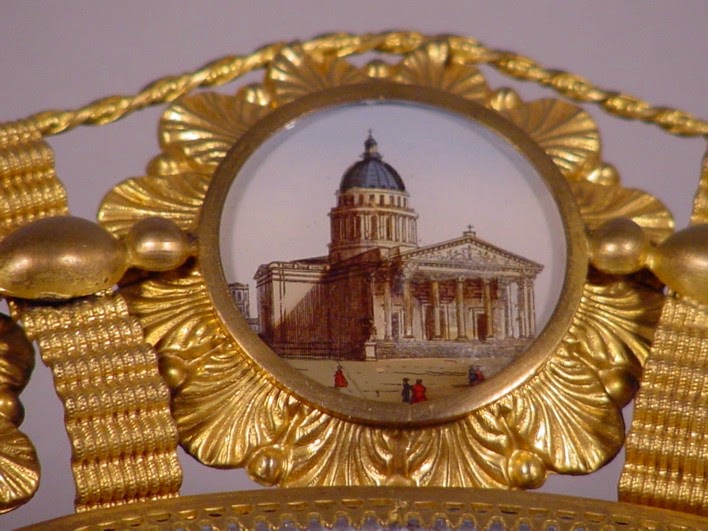 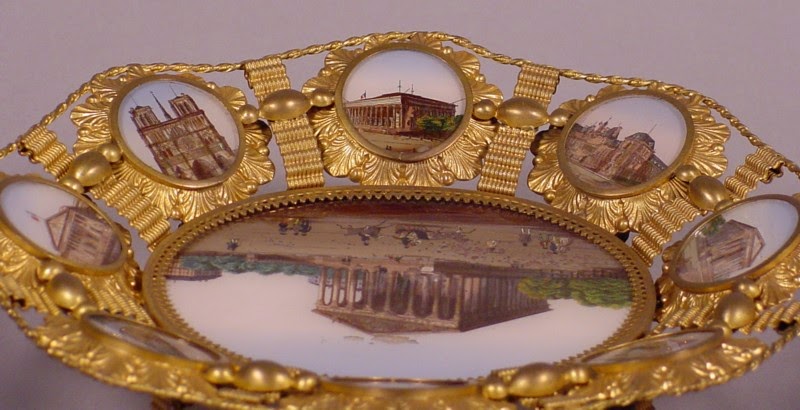 Other items of this category of collecting include such enchantingly witty things as this clamp for a lady's desk... 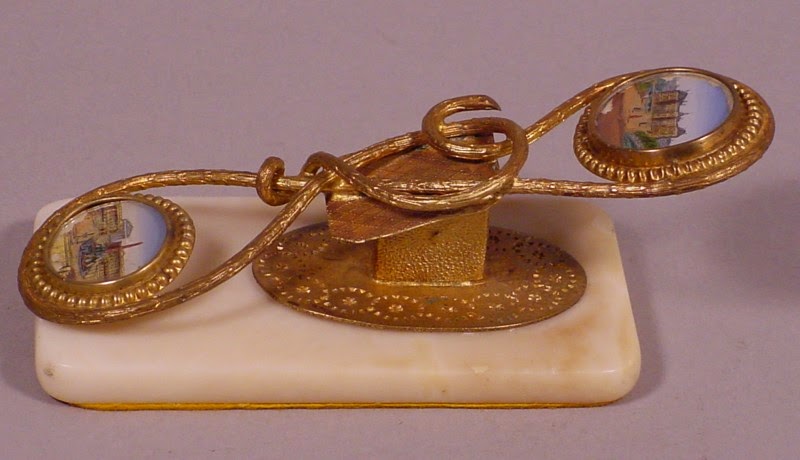 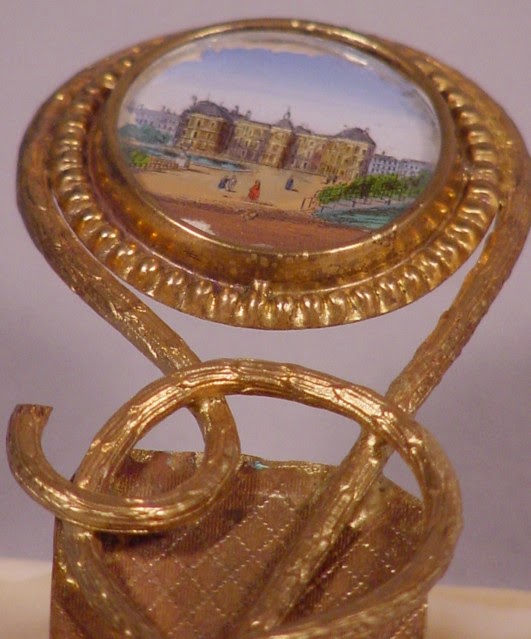 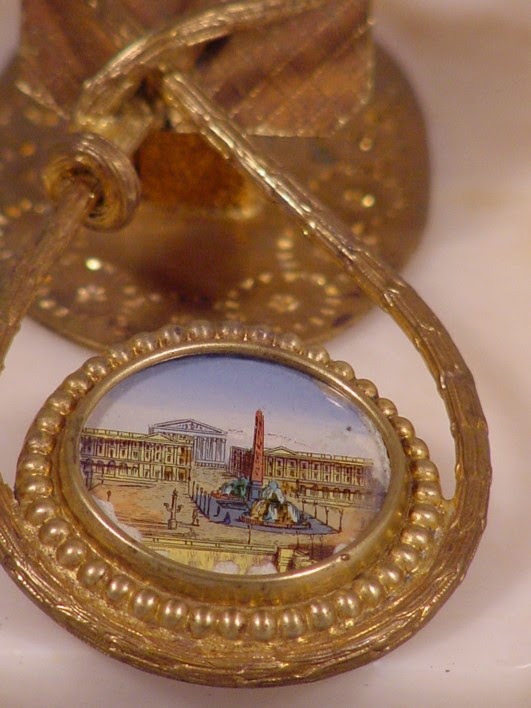 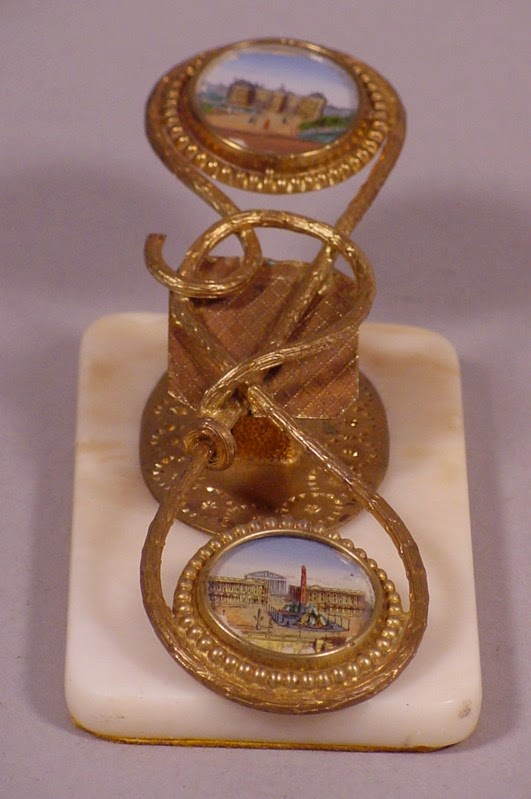 Here is another tray for calling cards seen below on the left with a charming dish on a pedestal base on which a lady could place rings and other trinkets on her dressing table. 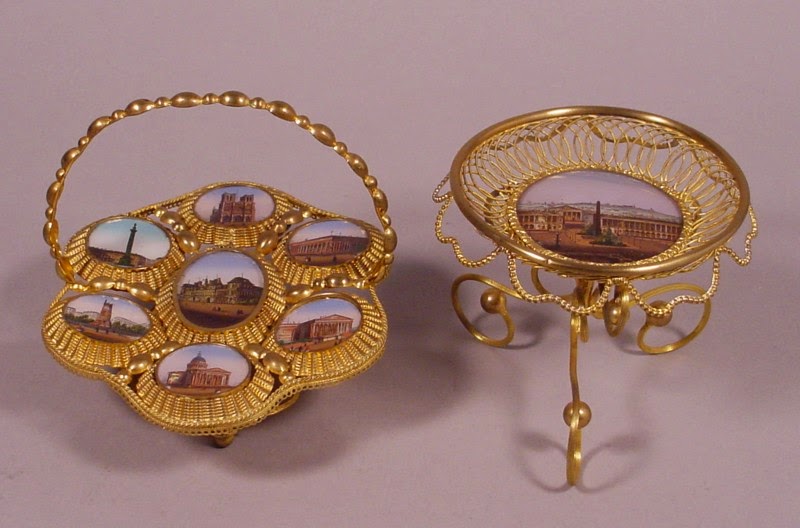 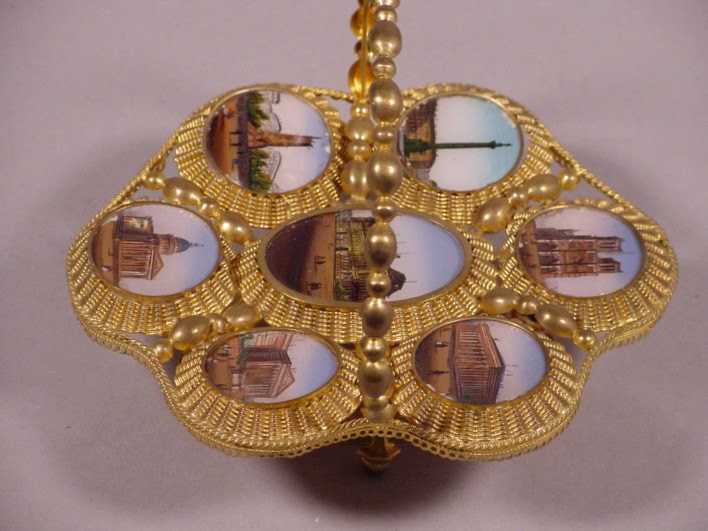 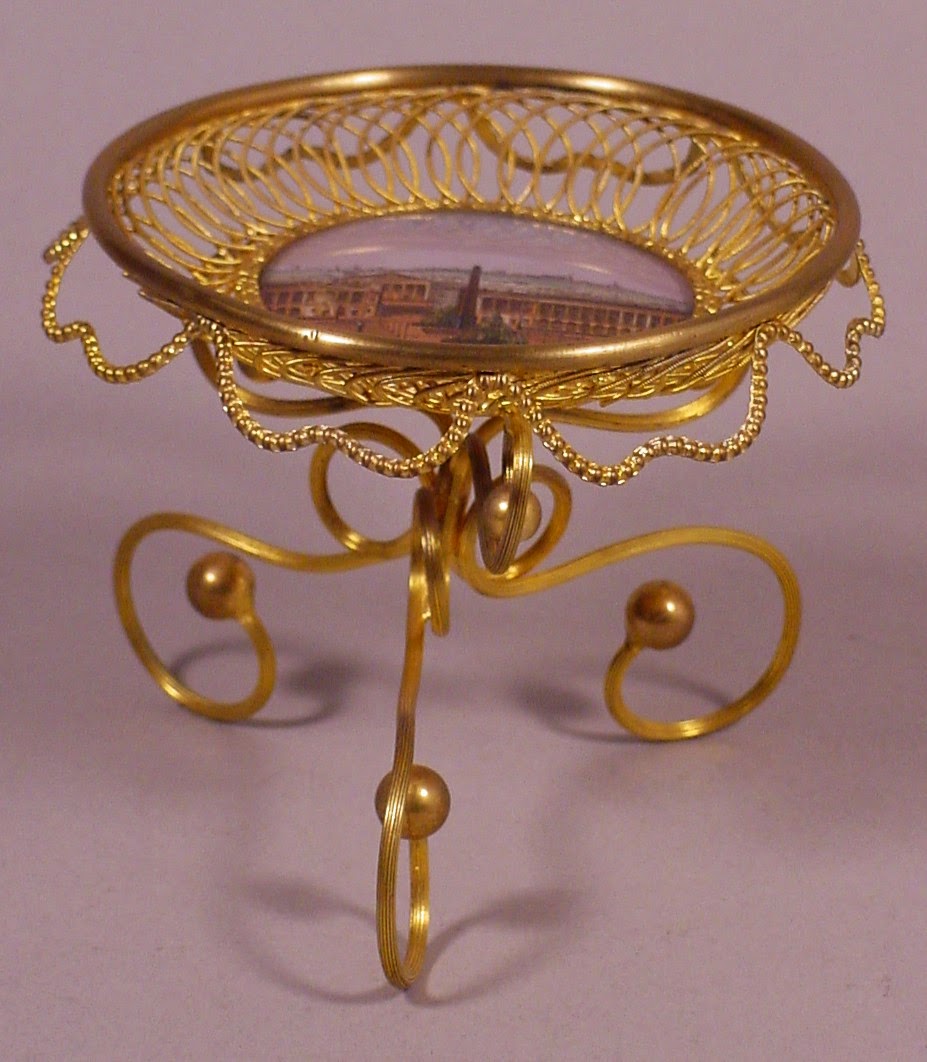 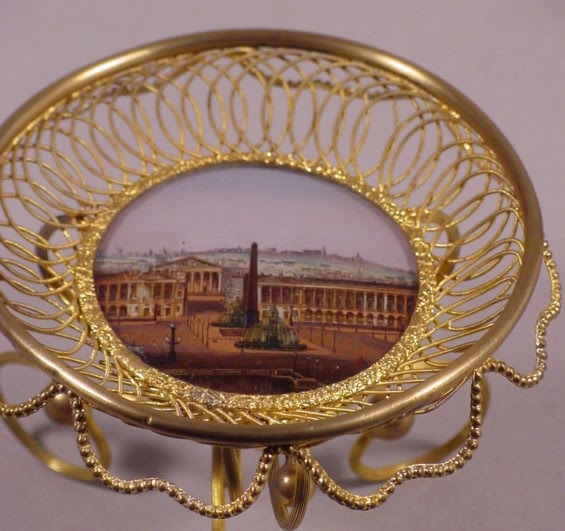 Below is another example of a romantically fetching receptacle for a lady's rings and small jewelry in the form of an egg on a stand with an upright painted panel on glass that also depicts a Parisian scene. 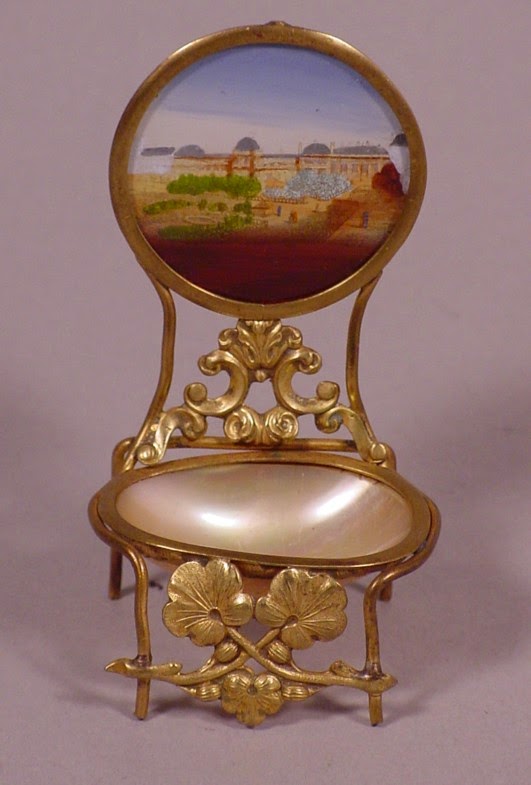 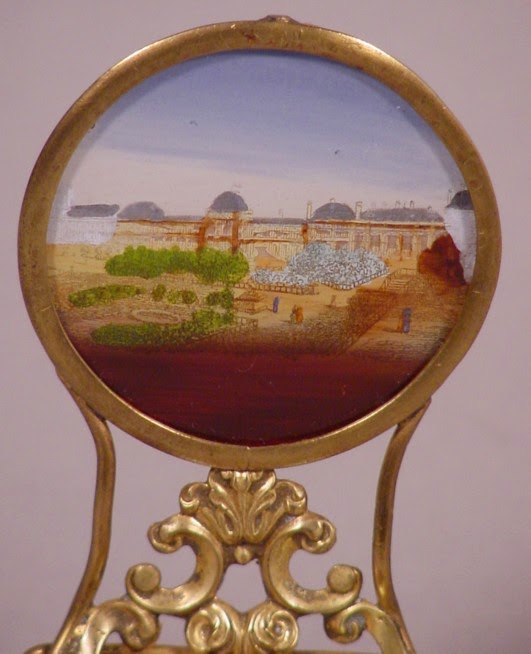 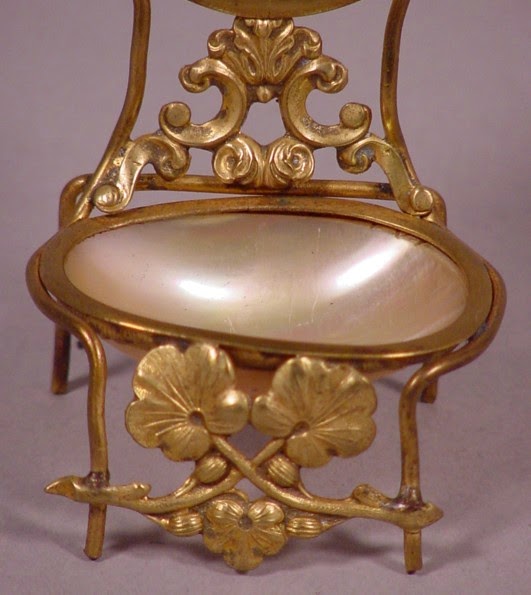 These items seem to have been popular in the 3rd quarter of the 19th Century and clearly lost favour as the later 19th Century began to cast its glance towards Art Nouveau and other moderne styles.  I had the great experience of handling all these objects photographed in this essay in 2001 when my company LFAS handled the liquidation of one of Miami's premier antiques galleries of the old school which was offered for sale in a historic internet auction in collaboration with Sotheby's on it's experimental Sothebys.com auctions which only lasted about 4 years.


Posted by The Curious Connoisseur at 2:16 PM No comments: