HANDLING THE REMNANTS OF A LONG AGO COMMISSIONED DAVID HICKS INTERIOR

In 2010 a regular client who engages my company LFAS to advise and liquidate estates invited me to assist his client to handled the private brokerage of the contents of a ravishing Miami Beach waterfront residence en bloc to a buyer who would be willing to take the good, the not so good and even the mattress in order to have the house ready for a closing that was less than  a fortnight away. It was a daunting task!  It took 3 loading vans working all day for many days to do the job. But the result was satisfactory for all parties and the buyer, once he sorted out the good from the less desirable, had made some good acquisitions for his antiques gallery.

On the occasion of my first consulting visit, I was haunted by a nagging feeling of déjá vu.  It looked familiar from photos of smart stylish interiors of my youth in the 1970's... The carpets, the accents, the window treatments all bespoke something very elusive and a "look" that was so familiar but to which I could not attach a name... Then finally, the lawyer who engaged me was in the next room in conversation with the maid of the deceased. As a long time experienced appraiser, broker and liquidator, I learned a long time ago, getting friendly with the servants of these affluent clients is vital to get crucial information the client is not longer around to provide. This deceased resident of the house was a local personage of great distinction. But he was dead and unable to shed light on much. But the maid said the magic name which I could hear from the adjacent room... DAVID HICKS!!!! Then it all made sense!

David Hicks was THE interior designer of the Jet Set and Beautiful People in London and abroad during the "Swinging 60's" and well into the early 1980's. His English clean and crisp approach to design respected traditions and also pioneered the use of things like chrome and lacqured Parsons tables, geometric patterns on carpets and fabrics of his own design and it was always hopelessly chic and seductive.  This is my favourite photo of him which originally appeared in an article in "Town and Country" in 1980 depicting Hicks in a devastatingly smart French Empire bergère in front of a stunningly theatrical canopied bed draped in shimmering crimson glazed chintz. The photo seen below is actually the one selected for the dust jacket cover of the definitive monograph on Hicks by one of his children Ashley Hicks. 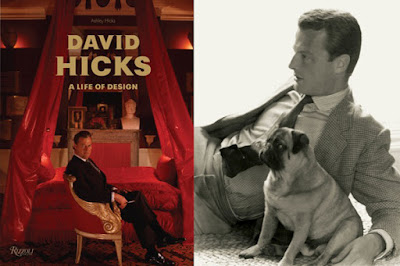 As I explored this house which had already been stripped of much by the time I got there,and from which a staggeringly important collection of old master paintings bequeathed to a major museum had already been dispatched to their new home, the place still bespoke the hand of Hicks just about everywhere one cast a glance. It was a complete time warp from 1969 when it was originally commissioned... And it was a privilege and a joy to handle!

In the foyer, one could espy the original 1969 chocolate brown linen box shaped skirted table with black braid for which Hicks had selected a pair of stylish French Neoclassical bouillotte lamps. 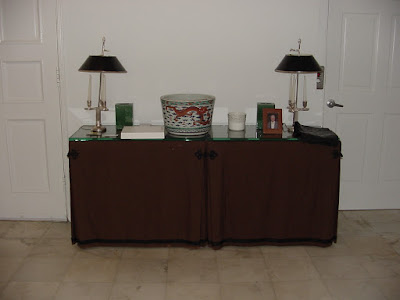 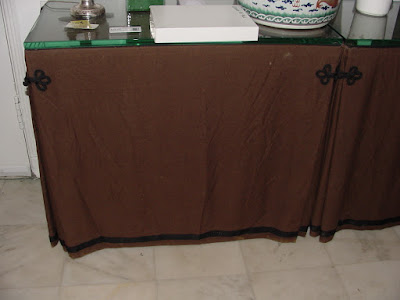 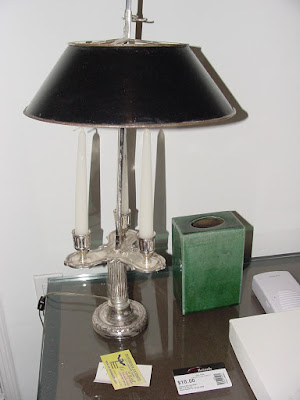 The dining room had a mix of Regency and Italian Furniture with Asian accents and some outstanding George III and Qianlong porcelains. 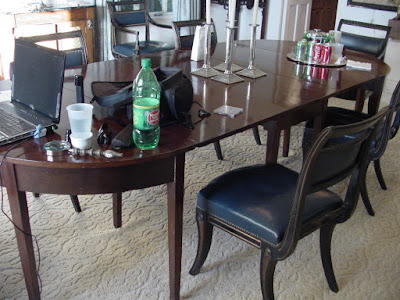 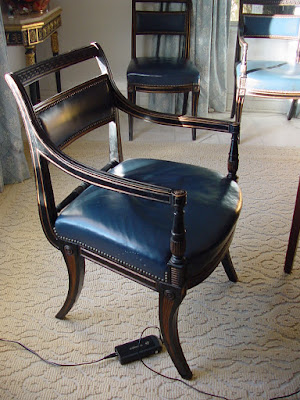 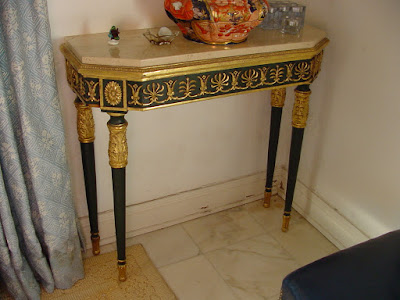 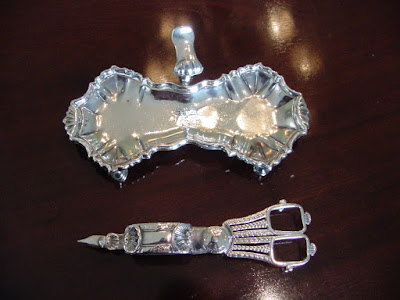 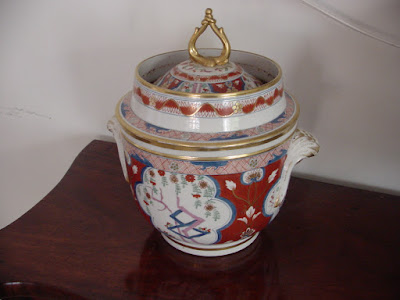 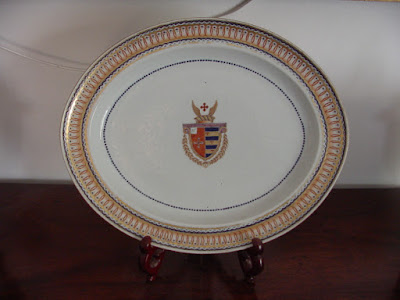 And those curtains with the Regency inspired pelmets!!!  Quel chic!!!! All intact they were too! 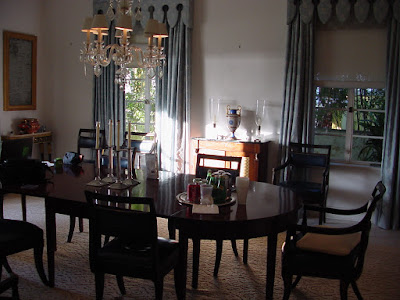 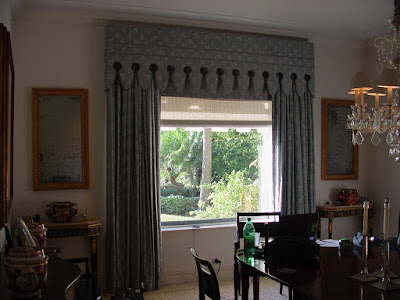 The living room had 4 of the most inviting Louis XV/Louis XVI transitional style bergères`a la reine with the most romantically and ever so gently worn chocolate brown velvet! 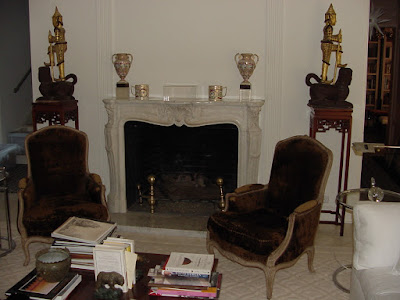 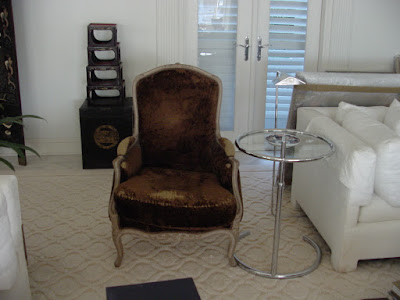 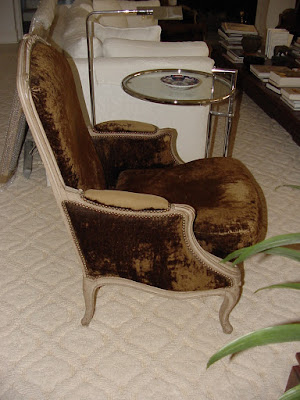 There was also an outstanding George III writing table in the manner of Bullock. 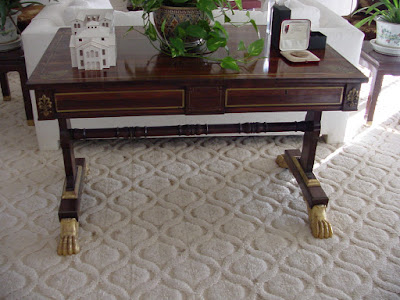 And the carpet.. David Hicks original design with the original label of the French weavers he used to engage to weave these deep luxurious carpets which, as with this one, were executed in white on white with raised sculpted designs. 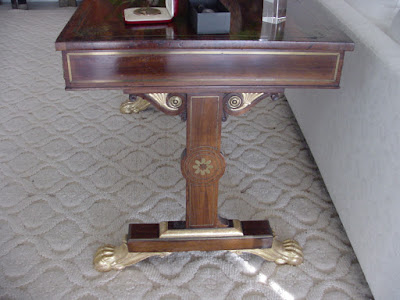 Another ther view of the room... 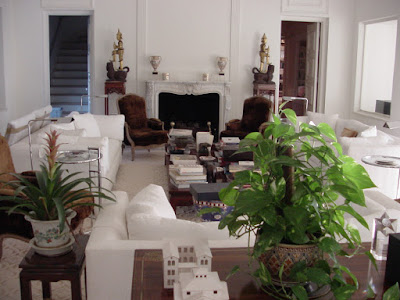 The library had ravishing David Hicks wall to wall carpets and upholstery on the chairs which were surprisingly well conserved.  See some views of the room below which includes handsome and versatile antique Jacobean benches used. as well as occasional tables and a striking Louis XV lacquered Chinoiserie bureau plat with a leather upholstered fauteuil de bureau. 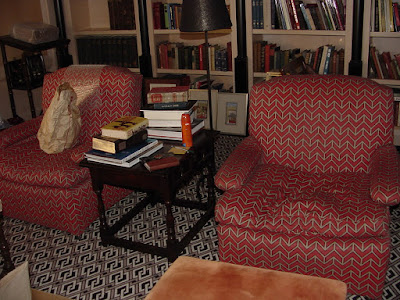 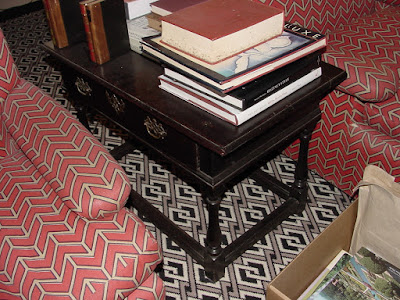 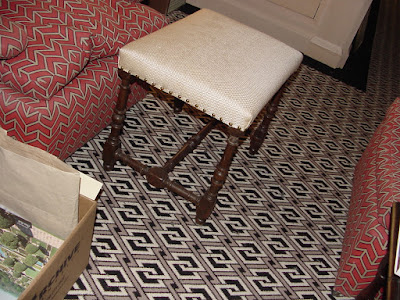 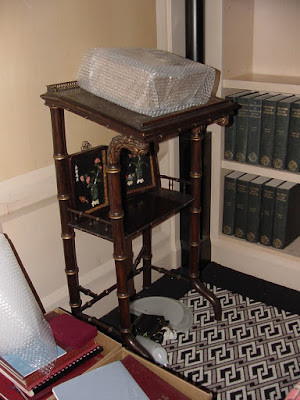 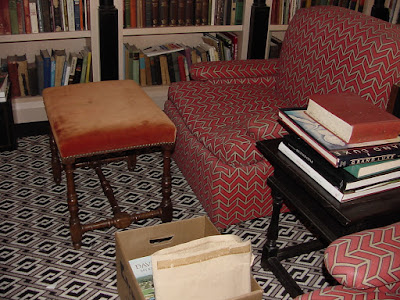 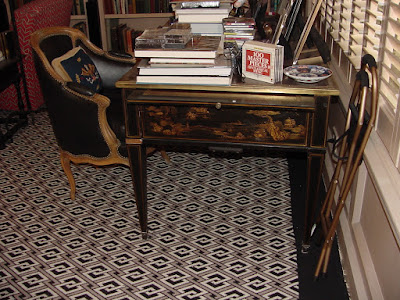 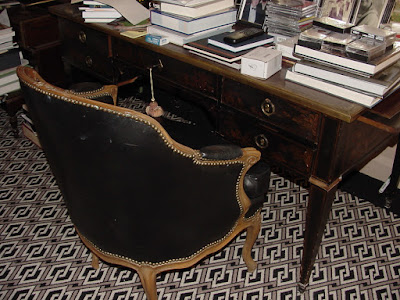 Very grateful for this unexpected and enriching opportunity to handle this memorable collection that was conceived by such a legend!


Posted by The Curious Connoisseur at 3:22 PM