A CURIOUS UNRESOLVED IDENTITY FOR MR. DEERING'S DESK AT VIZCAYA

Anyone who has had to listen to me discuss Vizcaya, a ravishing historic house museum and garden in Miami, Florida, USA, would not be amiss in perceiving it was something of a first love for me. It certainly is a significant and early contributory factor in leading me in the direction of the career I have had for over 30 years now as an appraiser, consultant and broker of European decorative arts and antiques. 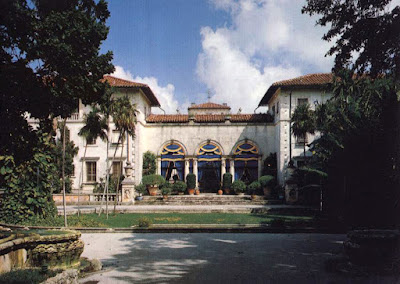 Vizcaya was built for the wealthy industrialist James Deering who was of the International Harvester fortune. Commenced just as WWI was beginning in Europe, the house was officially inaugurated on Christmas Day of 1916 and the museum is, in fact, in the midst of very lively centennial celebrations. The house made the transition from private residence to publicly opened museum in the 1950's.  Ever since, generations of administrative and curatorial staff have availed themselves of the rich original archival material in the museum that includes all manner of original records that reveal much about the years during which the house was under construction as well as the vast correspondence between James Deering and his artistic director and advisor, the discerning and debonair Paul Chalfin.  Of course in the museum's early years, the identification of much of the historic period furniture and appointments in the house were based on this archival material. But, as the years evolved, as did scholarship about the decorative arts, it was found that much in the house has needed to be identified anew and correctly assigned a different age or country of origin. I personally have always wanted to delve into a very notable piece of furniture that has intrigued me from the first day I saw it as a teen in January 1973 which is in the Adam Library seen below. 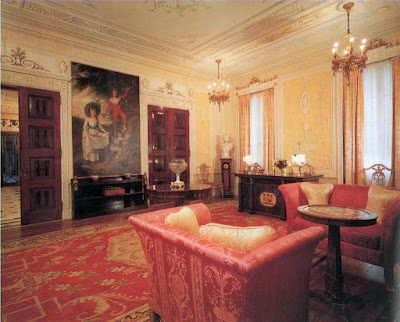 I refer to a desk that requires further investigation. Traditionally it was always believed to be a Neoclassical French desk, ca 1800 and often described as Directoire. 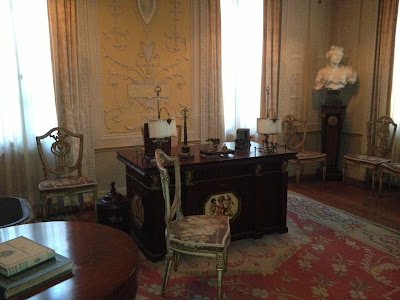 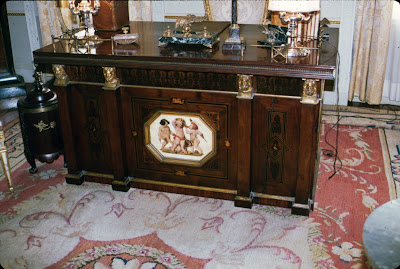 It is unique in its blocky shape, which according to either archival or perhaps just oral tradition, was due to the fact that it was the counter for a very posh Parisian candy store or pastry shop where the doubtless elegantly dressed sales lady sold her sweet delicacies. Often cited as a feature that makes the desk exceptional - and exceptionally pretty - is the 3 painted panels in the manner of Angelica Kauffman. The one on the front of the desk is seen below. Indeed these panels, depicting merry frolicking scantily clad children,  really are animated in their vibrant polychrome as they are charming. They make the piece distinctive in the most effective way imaginable and the bright lively painted panels create a rich and vibrant compliment to the sober mahogany case with ebonized decorated bands and gilt accents. The other two of the three panels are seen below. 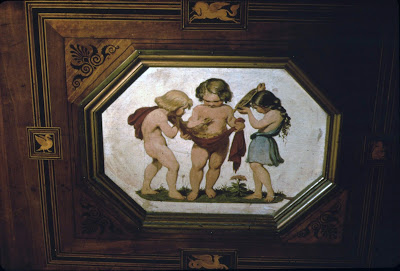 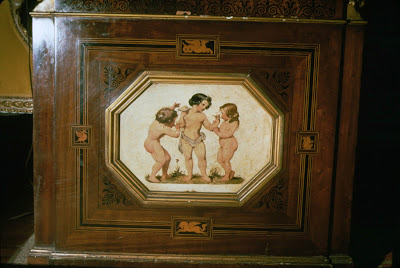 There can be no doubt of the desk's assertively Neoclassical demeanor. But neither the late 18th to early 19th Century French attribution really seems sustainable. This suspicion was confirmed by a highly and widely acknowledged expert in French 18th Century furniture, the New York dealer Anthony Victoria who shared his impressions in a letter after a visit to Vizcaya to me in the mid 1980's in which he cited it's "clucky" aspect that would not be likely to hold up as a viable or credible example of French Directoire - or even Consulat design.

The more I look at the desk and consult other world renown colleagues whose opinions are crucial in helping arrive at a plausible explanation for the accurate attribution of the desk's age and origin, I am now of the opinion the desk is very likely English. The noted expert in French 18th Century furniture Thierry Millerand was kindly allowed to examine the desk by Vizcaya's current highly accomplished curator Ms. Gina Wouters in 2014. Messr. Millerand was certain the construction details revealed by examining the drawers betrayed clear English construction methods of the 19th Century.  The more I look at the desk I am more and more reminded of the work of the Regency period cabinet maker George Bullock and see his influence here is concurrent with that of his French contemporaries during the later Empire and Restauration periods.

For instance, the assertively gilded animal capitals on the pilasters are very much in the French manner. But the assertive bands of ebonized decoration lending prominent attention to such motifs as the anthemion are pure Bullock! Here is an English cabinet in the Bullock manner of the same period in the 1st half of the 19th Century. Notice the similarities in the brass inlaid bands in this cabinet below and compare it to the ebonized decoration on Vizcaya's desk. The similarity is glaringly obvious. 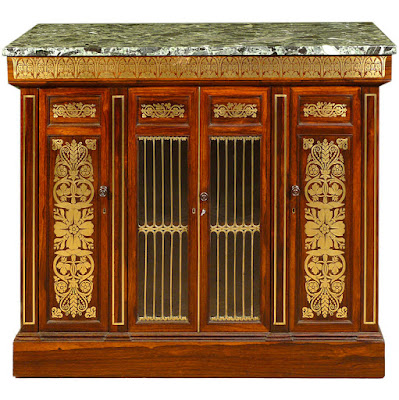 In conclusion - and hopefully to be continued because much more investigation is in order - it's safe to suggest the desk is English, probably 19th Century and very likely a bit later in the Century as late as the 1820's to even 1830's. Additionally, it may be possible the delightful painted panels that give the desk so much of its charm may possibly be a later addition applied to the desk later in the 19th Century. The panels themselves may also be early and perhaps earlier than the desk itself. But they may have been later added by an antiquaire eager to "marry" the components to make something really quite decorative and unique. Of course this is only my theory. And it's a tentative one at that. What is needed is a conservator's contribution to examine the desk and it's insides to ascertain if any traces of such an addition or "marriage"  could be revealed by an intense inspection of the carcass.

Until then, no one can argue it isn't a lovely piece of furniture! And I, for one, would never want or could imagine The Adam Library, in which the desk has been placed since 1916, without it! 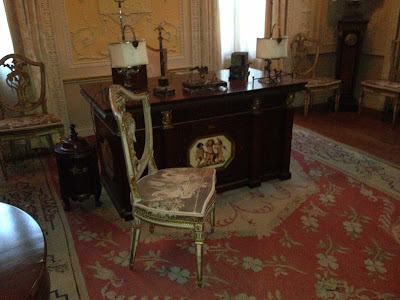 Posted by The Curious Connoisseur at 8:39 PM