It is lamentable that many of the under 40-something cast of today's antiquarian, collecting and even decorating scene barely know who this erudite and daring gallery owner, Juan Portela, was and how in some ways he anticipated the 21st Century departure from the assumption that only serious collectors of antiques and period decorative arts sought out either the Georges or the Louis styles.  After a time in Paris in the 1970's as an already established gallery owner offering a discerning and no less diverse inventory of primarily 19th Century furniture, textiles and decorative appointments, Mr. Portela and his then partner, the late debonair Frenchman Christian Herbaut, resettled in New York and did not go long unnoticed for the high quality and originality of the inventory initially offered from a Madison Avenue gallery which was eventually relocated to their historic townhouse on East 71st Street.  The pair are seen below as photographed in the Madison Avenue Gallery for House & Garden in a well earned celebratory article featuring the gallery by the late Nancy Richardson. Juan Portela is seen standing. 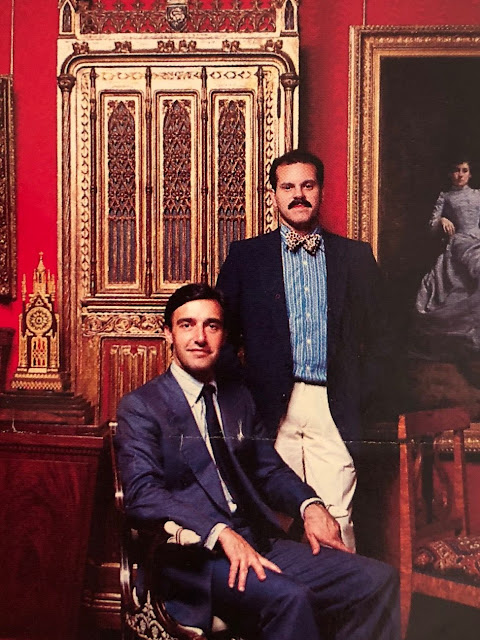 What brought Juan Portela to mind was a haphazard encounter with a copy that had not been revisited for years on my library shelves from January 1993, of the Christie's New York sale catalog published when Mr. Portela, by this time in the early 1990's alone, had decided to close the gallery in NY and relocate back to Paris. In the end, he actually relocated for a while to Miami Beach... But today he resides mostly in Paris the better part  of the year. The sale catalog is a splendid and valuable record of the inventory. This is the catalog cover below. 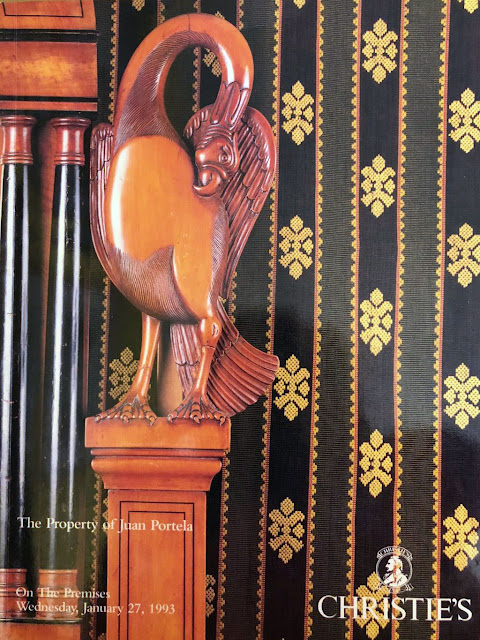 Mr. Portela's superb eye hints at a taste, in part perhaps influenced by Madeleine Castaing who also celebrated 19th Century eccentricity at a time when the 18th Century was sacrosanct and the 20th  century often disdained too hastily. But his taste was also, in many ways, innovative and anticipatory of the way 21st Century collectors and decorating trends would, after over a hundred years, begin to reconsider the immutable belief that nothing beyond the Empire could be taken  seriously or considered worthy of collecting - let along bringing into an elegant home to enjoy in one's drawing room or dining room!  Now that we're on the subject of drawing rooms and dining rooms, the catalog also included illustrations of the inventory as it was presented to Juan Portela's clients and as it was presented similarly to the public coming to visit the preview for the auction which was not held at Christie's proper but in situ at the East 71st Street townhouse. 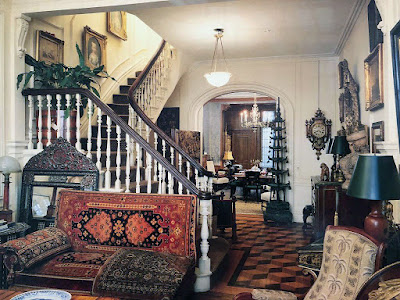 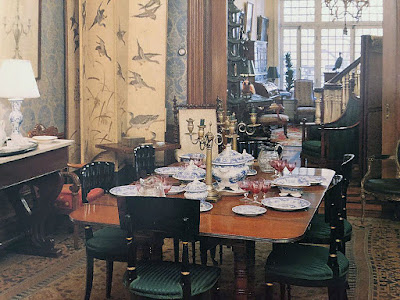 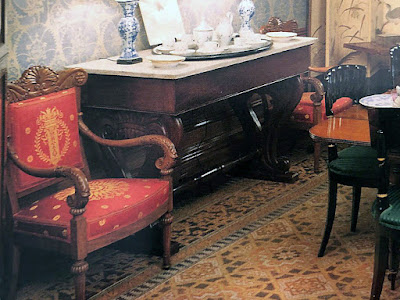 By the mid 1980's Juan Portela Antiques was a serious force with which to reckon in the New York gallery community. His clients not only included the likes of Michael Graves, Oscar de la Renta and Albert Hadley... But that formidable arbiter of taste, Mica Ertegun (wife of the recording mogul Ahmet Ertegun who founded and owned Atlantic Records) who  relied on Juan Portela for some of the cornerstone furniture and appointments to decorate her subtle but sumptuous New York townhouse that was featured in the March 1987 issue of House & Garden and was also the subject of its cover seen below. 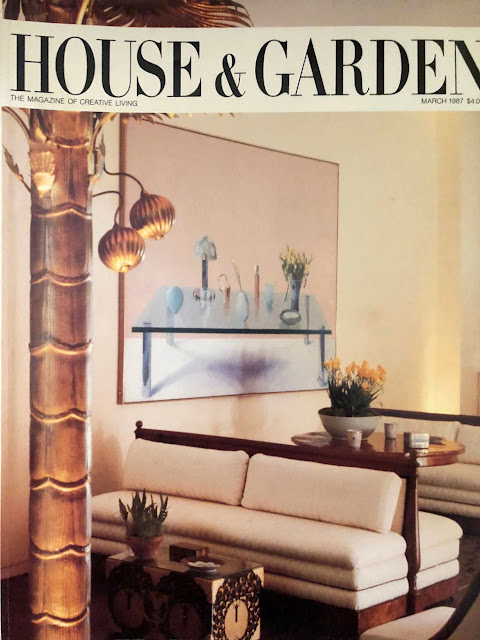 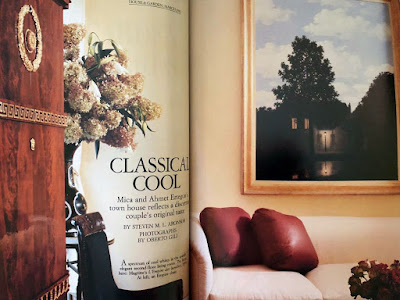 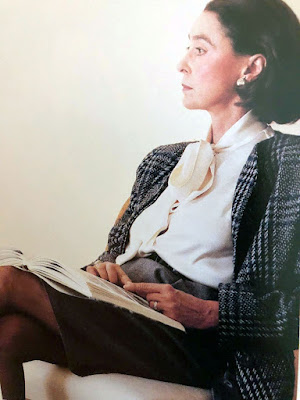 The article cites that, it was from Juan Portela, that Mrs. Ertegun procured the unique and apparently quite inviting pair of Biedermeier  sofas and the wide multi-functional William IV table seen along the left wall under the Ellsworth Kelly which served as the bar. 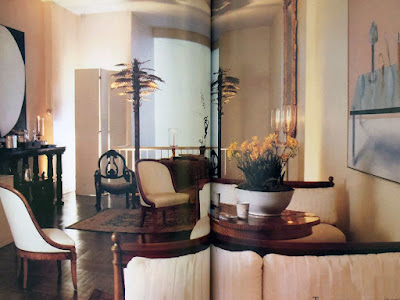 Perhaps it was a good strategic gesture that Juan Portela Antiques also inserted this half page advertisement in the same issue that is seen below. 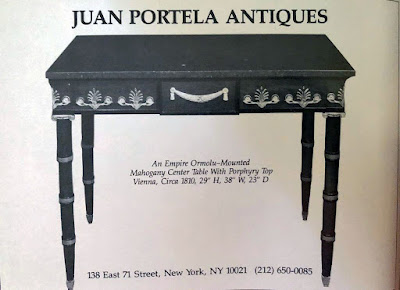 Perhaps no greater indication of the respect for Mr. Portela's knowledge, taste and discernment was evident, than when he sold this monumental secretary desk of mahogany with marble columns incorporating a clock to the Getty Museum in California! The desk was made by the Prussian cabinet maker Johann Andreas Beo who produced furniture on the same level of David Roentgen for Prussian royalty. The cabinet was commissioned from King Frederick William II of Prussia in the 1790's.. It is seen below in this photo I took during my last visit to the Getty Museum earlier this year. 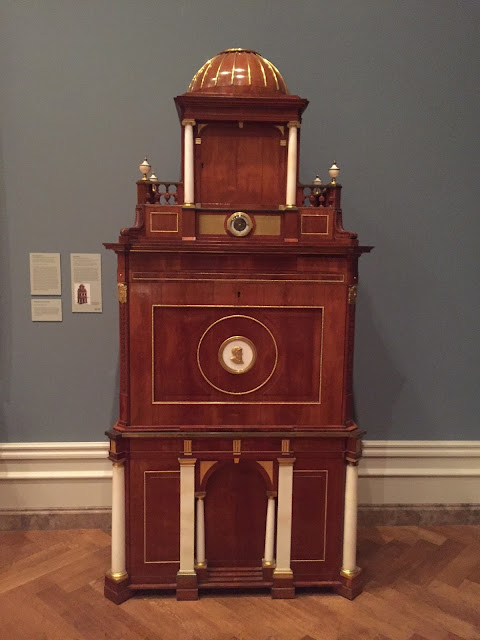 With such credentials and experience, it's little wonder the Chistie's auction in New York inevitably attracted a great deal of interest in the international antiquarian and collecting community.  Among the more notable items in the auction were charming paintings. These works of art were not at all in the intoxicated 1980's category of show stopping trophy acquisitions for the kind of collector seeking to impress. On the contrary, these paintings were pregnant with historical charm and evocative power while not being by the hands of masters who command huge prices on the auction block. These were art acquisitions for the self confident collector whose appreciation of their merits is based in a love of history and an ongoing fascination and understanding of their invaluable historical documentation of the past,  its daily life and social customs as well as offering records of historical events. A good example of that would be this powerful pair of visual records on canvas depicting the fire of Moscow during the French invasion of Napoleon's armies in 1812 seen below. 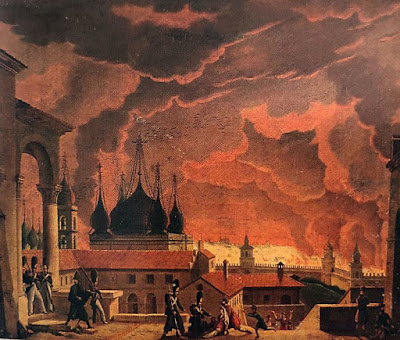 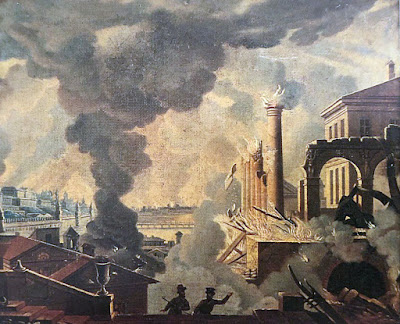 This pair of children's' portraits by the hand of the 19th Century painter J. P. Vallen is also representative.. 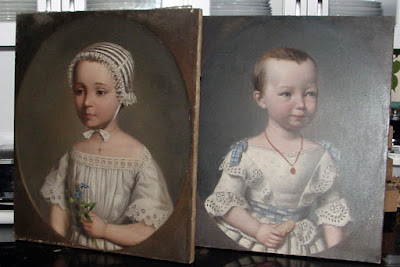 Seen below, in another room is a portrait of a lady at the harp along side hanging textiles and other intriguing 19th Century items... 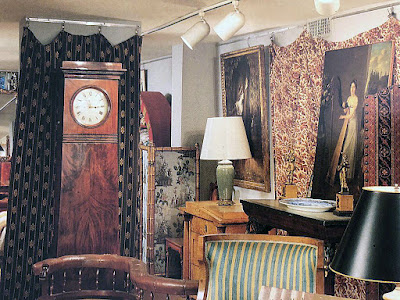 This fetching and romantic portrait was by an unknown artist of the early 19th Century French school. 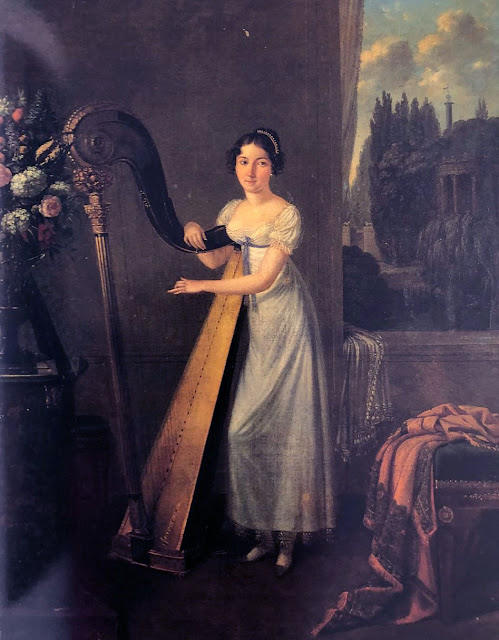 Juan Portela unabashedly delighted in textiles and offered an enviable selection of mostly 19th Century tribal and European woven bolts and fragments suggested for use as either wall hangings on their own merit, or use as upholstery.  Below is an illustration from the catalog of the variety. 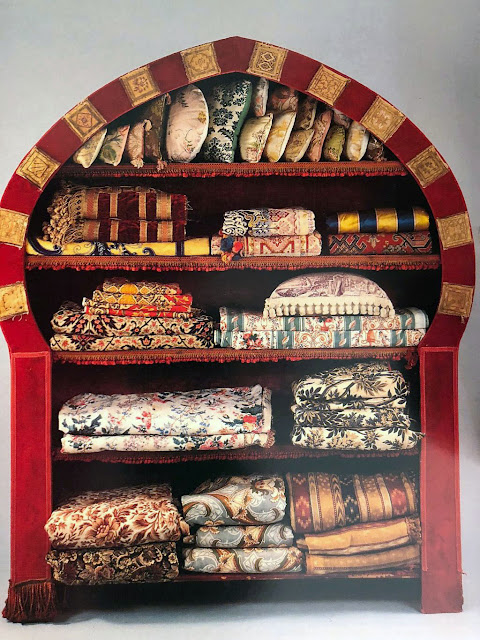 The library below is demonstrative of how Mr. Portela "practiced what he preached" with regards to using woven tribal textiles as upholstery for sofas and divans 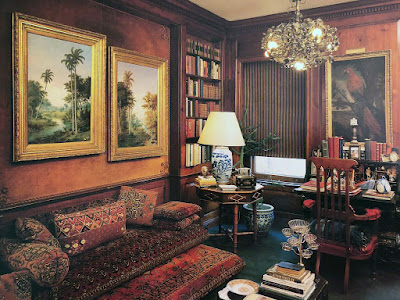 Juan Portela's appreciation for the festively eccentric and joyful extended to endless media and categories. Like Madeleine Castaing, he did not fear the operatic exuberance of the Second Empire. A fine example is this Napoleon III period French porcelain and lacquer umbrella stand seen below. 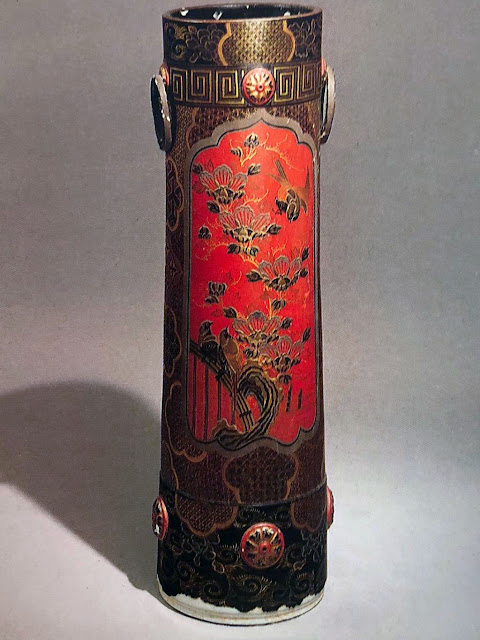 No less  exotic, but infinitely rarer was this offering at the auction of a rare Korean Imperial court screen of the Joseon Dynasty, ca 17th/18th Century depicting the various birds of Korea.

Unapologetic delight in assertive bold self assured love of the rare, the exotic, the superior and sumptuous was invariably to be expected of Le Style Juan Portela.  Objects of malachite were often seen in the gallery such as these offered at Christie's at the auction seen below. 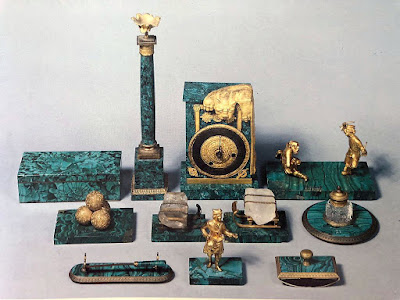 At the same time, Juan Portela never set out to epater les bourgeois for the sake of it. A man of an apparently limitless erudition and appreciation of the classical, Juan Portela loved the late 18th and early 19th Century styles of Louis XVI, Directoire, and Empire as well as the era of the Regency in England while having a long time penchant for the effortless chic of Baltic neoclassicism of Stockholm, Copenhagen and Saint Petersburg. That being established, when Juan Portela offered his privileged clients inventory of that provenance, it invariably had something unique, stylish and endearingly eccentric that set it apart from other examples of that more conventional period.  Such examples of that are seen below...

One example of a suite of 6 Painted Continental Swedish Neoclassical dining chairs, ca 1800... 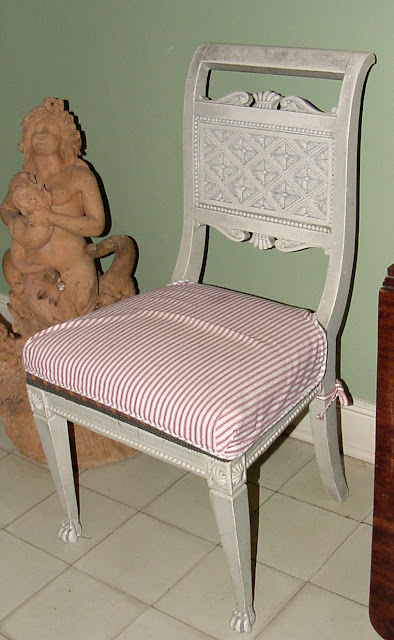 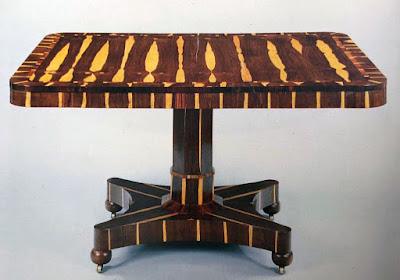 A suite of Biedermeier ebonized case furniture that included a pair of pedestals with storage and a commode seen below... 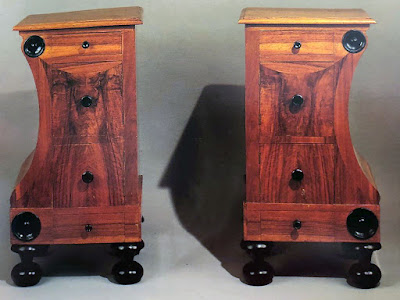 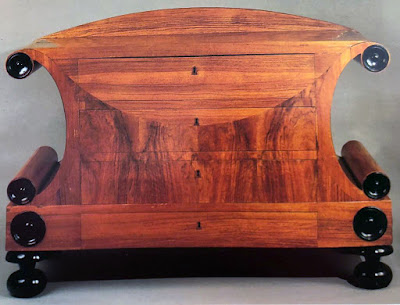 No less unique and imposing is this Italian satinwood and ebonized dressing table in a dreamlike Neo Gothic style, ca 1820's from Lucca. A detail of it is seen on the cover of the Christie's catalog. It recently also resurfaced on the retail market on 1stdibs.com not too long ago. 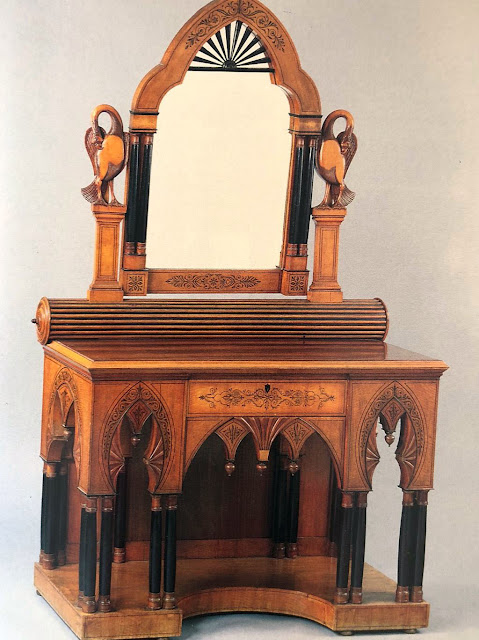 Some personal favourites include this utterly irresistible pagoda seen next to a more conventional Louis XVI period ormolu wall clock in the main drawing room and illustrated in the Christie's catalog. 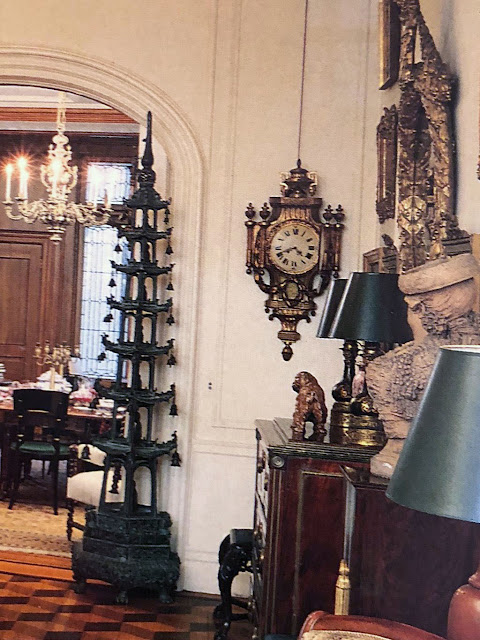 Perhaps a good illustrative note on which to wind up this long overdue tribute to Le Style Juan Portela is this other photo from the catalog of the Christie's auction demonstrating the happy co-existence of a Dutch Rococo period side chair, flanking a mahogany and brass early 19th Century "Russian Jacob" commode under a Neoclassical late 18th century oval Italian mirror. Only a collector who self confidently knows that good design is good design is good design without concern for age or provenance could combine these seemingly disparate items with such effortless panache! 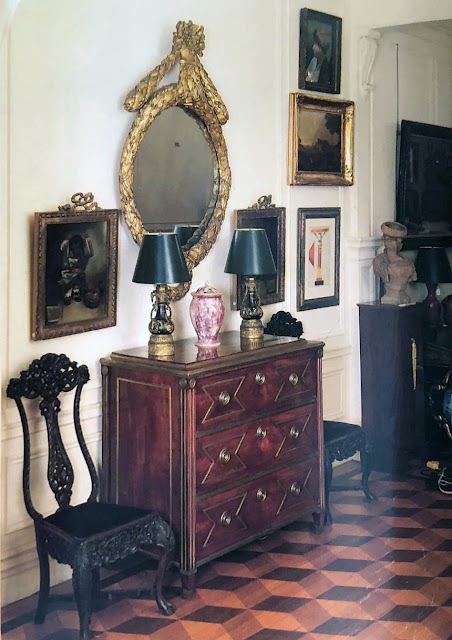 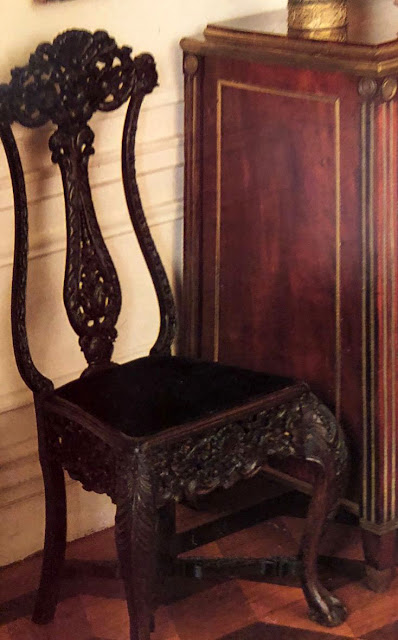 It is very much to be regretted that, in this more monochromatic age mesmerized by minimalism and modernism, no one has apparently stepped in to take the place of the irreplaceable Juan Portela in the antiques gallery scene in New York... But one may hope!

Posted by The Curious Connoisseur at 10:19 PM