After three decades of experiences in the metier of the the appraisal, brokering and liquidating of fine art, antiques and related household contents of distinction, it remains a signal honour when entrusted with the liquidation of the estate of a distinguished antiquarian and gallery owner.  Fewer dealers based and active in S FL could have a claim to cachet and the respect of his peers than John J. Thompson. His heyday was the 1960's and 1970's. For years he enthralled the discerning residents of the S FL antiques collecting community with his Fort Lauderdale gallery, located on the still fashionable Las Olas Boulevard. At that time his patrons also included sophisticated visitors to the area as well as seasonal residents who relied on "JJ" (as he was affectionally known) to maintain an impressive inventory of fine European 17th, 18th and early 19th Century furniture, decorative objects, lighting and an intriguing offering of paintings. At the same time Thompson invariably loved to buy and offer fine Asian antiques that would include fine porcelains lacquer, and bronzes in addition to the occasional fine coromandel folding screens.  Unfortunately, I only encountered him once shortly before he died in the early 1980's.  But as a young antiquarian myself, I was at the time in my 20's and working for a long established Coral Gables based antiques gallery owner as a personal assistant, J. J. Thompson was frequently cited and discussed with awe and immeasurable admiration by that generation who held him up as being from the ranks of the elite in the profession. In fact, Thompson was among the few dealers from S FL (and possibly the first) who exhibited his offerings at the East Side Settlement Antiques Show in the Park Avenue Armory during the 1960's. While exhibiting there he sold a pair of armchairs with the stamp of Georges Jacob to no one less that Jacqueline Kennedy when she was First Lady!  Another client was the entertainer with the booming voice Ethel Merman.

However, long after his death, my office was thrilled to receive a phone call inquiring about the possibility of arranging and administering an estate sale for a considerable volume of inventory he'd owned and with which he'd lived that had continued to be used and enjoyed by his surviving partner, a delightful gentleman who had acquired JJ Thompson's love and appreciation of French and Continental furniture and  who was now getting elderly and seriously wanted to downsize and have an effective liquidation.  What a privilege that was for my company, LFAS!  To this day, it remains one of the most enjoyable projects undertaken by my company. Lots of hard work, organizing, pricing, preparing, marketing and then holding the sale which was hugely appreciated by the buying public that included a good amount of dealers who realized this was inventory they wanted to have a chance to acquire for their own galleries.  One dealer really went to town and loaded up a van with his purchases and enjoyed proudly showing these lovely things in his gallery and slowly sold the items slowly to appreciative new owners giving them a safe and appreciative new home.

To get an idea of the J. J. Thompson nearly vanished style of collecting and way of living with antiques, a look at a vintage copy of a S FL magazine long out of circulation gives us a glimpse. In the same article's illustrations are many things LFAS handled when it liquidated the remaining art and antiques in the summer of 2008.  Below is a photo of J. J. Thompson seated in his "Florida room" as it's often called by Floridians, beyond is a glimpse of the more "formal" sitting room. To millennials, the concept of a formal sitting or drawing room is becoming less and less familiar. But this was the early Pre-Watergate Nixon Era 1970's and at that time it seemed that from time immemorial civilised people had separate formal areas in their homes and didn't dine in the kitchen!

Below is the cover for the April 1972 magazine in which the feature article discussing Mr. Thompson's house and collections is seen.  The magazine was called Gold Coast Pictorial. By the time LFAS was engaged to liquidate the remaining collections, the fine Louis XV/XVI transitional commode, the Ming arm chair, the fine inlaid Louis XVI tric-trac table had been sold at a prior disposal of things immediately following Mr. Thompson's death almost 30 years before LFAS was called in to assist with the remaining inventory. However that doesn't mean that the remaining inventory was insignificant by any stretch of the imagination!  For instance the liquidation my company LFAS handled included the fine Louis XVI period mirror seen in the cover photo over the commode. It also handled the elegant gleaming bouillotte lamp seen on the tric-trac table. 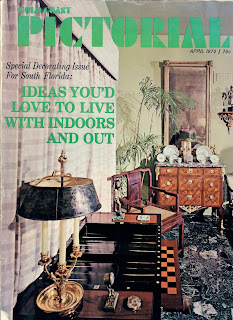 The illustration below shows many items remaining for LFAS to handle when it was entrusted with this stylish and elegant variety of lovely European antiques.  For instance, the sale included the lovely Continental burl table seen in the foreground with many of the items on it including the pair of lamps flanking the sofa.  Part of the remaining inventory LFAS handled in 2008 is seen in the dining area. Among them is the handsome exuberant 18th Century gilded wood Rococo wall mirror over the Italian Neoclassical commode. Many of the small items in the room also were handled by LFAS.  Mr. Thompson had a eye for the refined. But he also loved the quixotic and the whimsical. 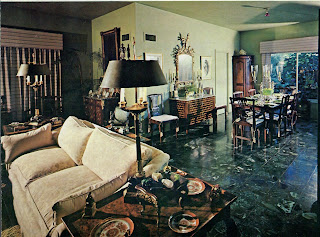 Below is a 2008 photo of the same burl table when LFAS liquidated the remaining inventory. The 18th Century German porcelain box, the miniature 19th Century Continental Rococo table were also part of Thompson's original collections. 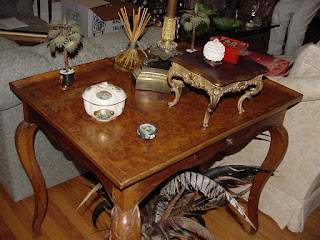 Below, the illustration from the same article shows the antique French oak fireplace surround and the small highly refined Late Louis XVI period diminutive commode with 3 drawers which was sold to a discerning gentleman and his wife who still own it in their North Carolina residence and cherish it. The gilt bronze clock on the mantle was also handled by LFAS 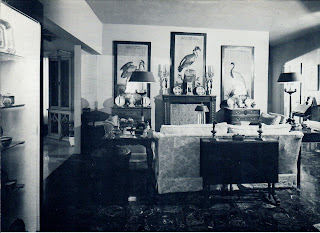 Below the view of the courtyard patio also shows the garden ornaments LFAS enjoyed handling. 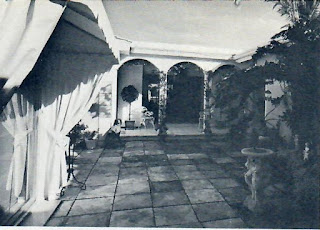 And just discernible in the colour illustration from the same article below is one of 2 lovely vintage cast stone artichoke finials that were placed on top of the entrance to the courtyard. 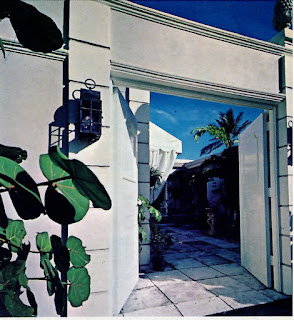 More recent photos taken in 2008 include other items LFAS had the distinct enjoyment of handling for Mr. Thompson's surviving partner who was also one of the loveliest most appreciative clients one could ever encounter.  In the two photos below are views of a charming painted and gilded 18th Century Italian corner cupboard. 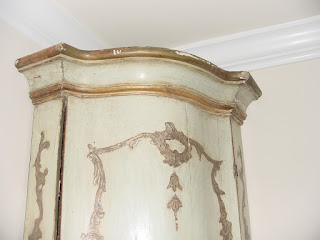 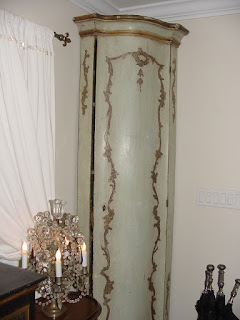 Below is the ravishing 18th Century Rococo wall mirror seen here when photographed in 2008 and seen in the original article referenced above. 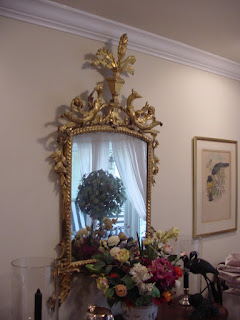 Below are the patinated and gilded bronze Napoleon III Empire Revival lamps also seen in the original article and placed on the same table where Thompson placed them decades before during his lifetime. 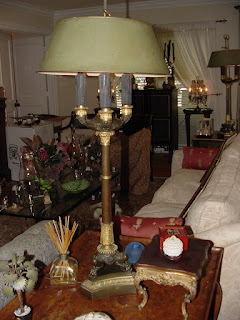 Below is the Louis XVI gilded wood mirror originally seen on the cover photo of the 1970's magazine.  Again, it was a joy to handle such a lovely example when LFAS was engaged to liquidate the remaining collections. 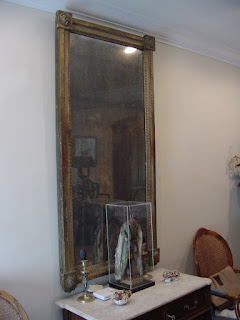 This especially elegant late Louis XVI mahogany commode seen in this 2008 photograph when it had been enjoyed after many years by Mr. Thompson's surviving partner, was also seen in the original article on the left of the mantlepiece. Perfect for a small apartment by nature of it's slightly diminutive scale. 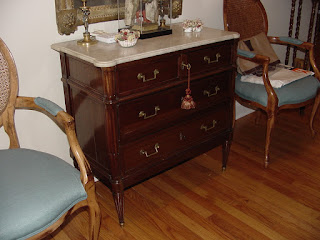 The last image below also includes a pair of Empire patinated and gilded bronze candelabra, a pair of ormolu putti, and the same ormolu clock also seen in the magazine article featuring John J. Thompson chez lui seen among his beloved collection of furniture, art, bibelot and Asian items which included an admirable and extensive collection of Chinese Export Porcelain in the Fitzhugh pattern that had long been dispersed before LFAS had the enjoyment of liquidating what had remained for a few years and been given such love and appreciation before finding new owners.  The rarified old world and old moneyed taste enjoyed by John J. Thompson really represents another generation and another era that lamentably has all but entirely disappeared and seems to be in a very small clique of people who appreciate the refinement represented by the 18th Century in France which was once inspired so many educated affluent collectors and now has been significantly reduced to a small circle of collectors and aesthetes that are self assured enough to not be enslaved by today's glacial fashion for Modernism! 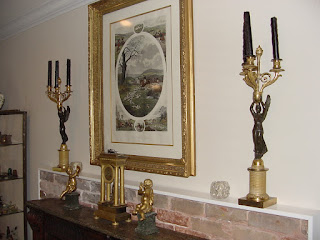 Posted by The Curious Connoisseur at 8:38 PM